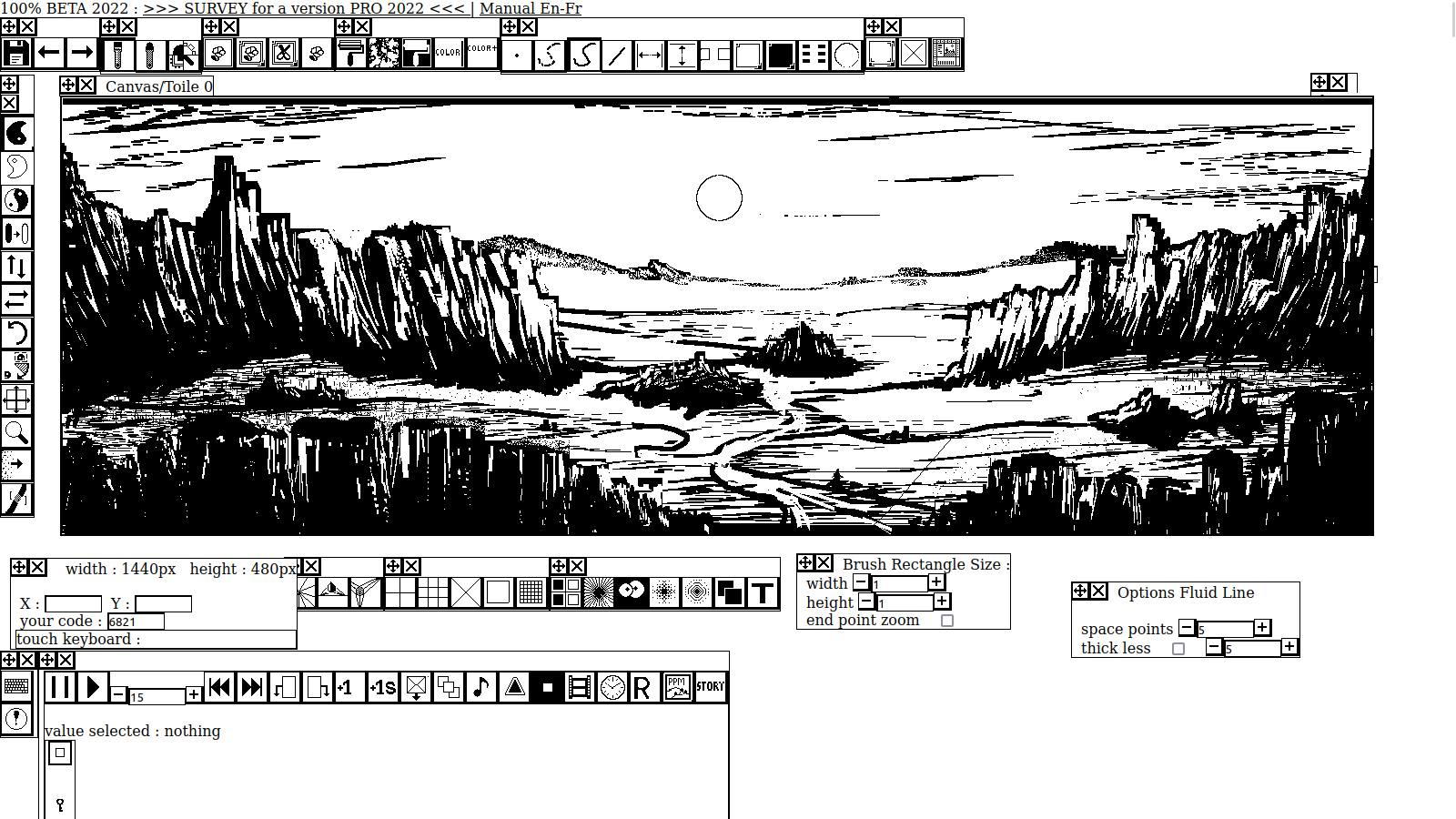 The next Animation Software of the market. 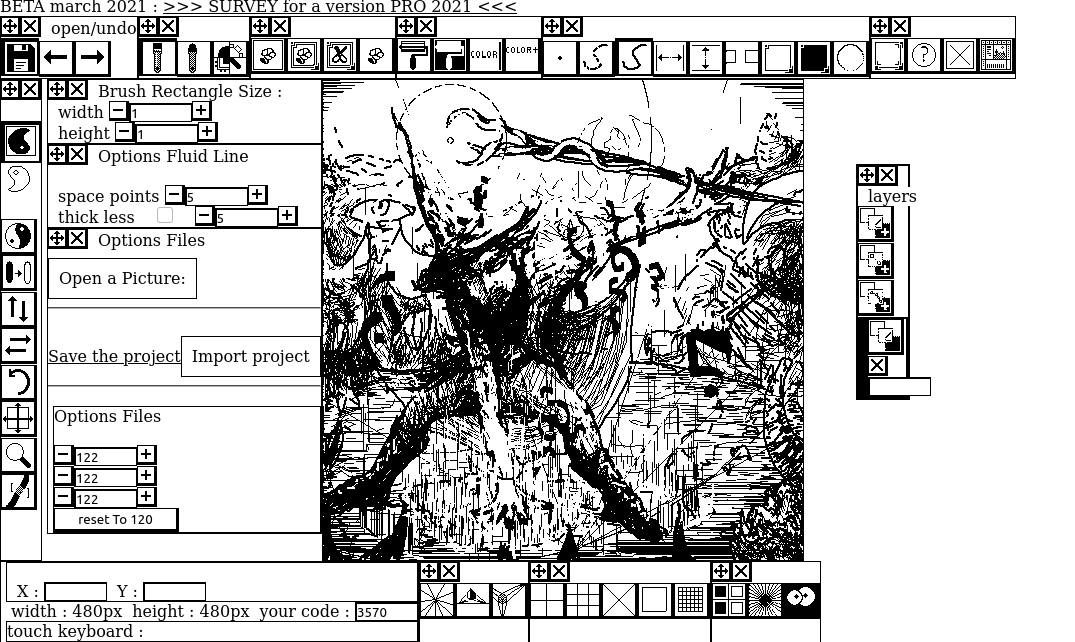 Created by an animator :

I created this 2d animation software not to work faster or easier but to avoid to cut the moment of inspiration by the need to take a pause from classical LCD screen that create artifical light who generate eyes strain after some hours of work.

In my opinion Einks devices protect more the eyes than a window set on your monitor who the blue light.

You don't need specific sun glasses to work more, but if you want to use glasses or specififc monitors my animation software allow different colors for his graphic interface and you can change them n with the button on the top right of the app.

At beginning in 2017, I thought that as an animation software for Eink devices as PaperLikeHD of the brand Dasung tech. This compagny Dasung sell a device called Dasung PaperLikeHD in 13.3" inch and now with a _25.3" size at more than 15 frames per second and near the speed of a LCD, so I thought that enough to make 2d animation, with a black and white graphic user interface pixelated because Eink devices often change the pixel ratio and especially don't create artificial light that generate red eyes syndrome, so you can draw all the day without to take a pause for you eyes and break your inspiration.

A 2d animation software with a pixels art engine.

It's a pixel engine in black and white with an external render engine to see a key frame or the entire animation in colors on an other instance of your webbrowser with a classical LCD.

It's not a vectors engine.

This animation app is not here to replace vectors animation software as Harmony software or Inkscape.

and soon with a little 3d modeler.

This animation software is not a 3d engine with a 3d render engine as Blender, Cinema4D, Houdini or 3dMax.

This animation software work with Javascript in the web-browser, It's' not a webGL engine, it's a matrix of pixels, so you don't need a specific graphic card all the rendered pictures are on your CPU and a part on the server side.

For the Eink Ereaders market :

This type of software need RAM and a good CPU event if a lot of effort was set to improve memory management on little einks devices ( sample 7inch) the software is slow, the software is more for Teams that want to make spirits for video game in pixels art for Ereaders market.

To follow this market who evolve every 6 months, a button allow an export in the PPM format for ACeP Devices in RGB P6 bytes, for other key frame can be exported in PNG and JPEG..

It's not a Storyboarding Software but there are tools to write sentences for a frame and a tool to make a little synopsis or an entire script with buttons to have a brainstorming to help you to find a good idea by blending words.

The purpose of this software of animation, it's more for pre-production and not thought for post production, it's not a compositing software and it was thought to create a plan of an animation with a background and a character in flat colors with edges with colors as old cartoon.

Even if the grahic interface can feel strange at the first time there is all the tools that you can imagine to draw as brushes, perspectives tools, gold rules, flip tools, layers, specific layers to see intervals, symmetry tool, multi plans, tool to create cases for comics,  ect...

Tools and features for animators :

The list of tools is long as two arms, and lot of tools can take parameters linked with the time line,

The interface is in french and in english, the manual is at the bottom of the app.

The app is devided in 3 parts :

Pixel mode begin to be very complete to draw with circle ovale, rectangle, brushes, points, plotting, flip tools on X and Y axis, and a complete tool to do pixel art.

The time line is full of functionnalities as add frame by frame or by pack of frames with a possibility to add notes of musicstrong> (but not yet sounds), and see interval on specific layers as with a Light Table, there are not enveloppes but there is a system of sliders to change parameters in the time for a sequence of frames..

There are tools to help you to find the good composition as perspective tools, gold rules, cross lines and a grid.

A system to do symmetries on x and y axis for pixel mode alone.

The export in black and white mode is in jpeg, png (with a transparency mode), the export allow an array of 1 and 0 for a frame in format txt and gif format for one frame.
A mp4 export tool for animation is allowed, to export/import project in a JSON format.

There are tools to fill white areas with colors and there is a tool to transform black trace pixels to a color and then render the picture on another web-browser on a LCD screen to have a picture as the old cartoons.

And of course you hvave on pc and android tablet keyboard shortcut as ctrl+z and ctrl+y
At the beginning the rendered picture must stay flat but now the software allow gradients  vertical/horizontal/circle and from vectors for 2d volumetric effect.

Brushes tool have an option to see the end of them in the magnifier to see where to fill a gaps between traces or remove too much pixels.

* The open Beta don't ask your email or your adress or your credit card. But, if an error is detected
a message is invoiced to the programmer. Cookies are used to store keyboard shortcut, they are stored in your web-browser directory and it's all!

Then click on the link you will be redirected on essaie dot fr for free and on the open beta, essaie is the french word for try!